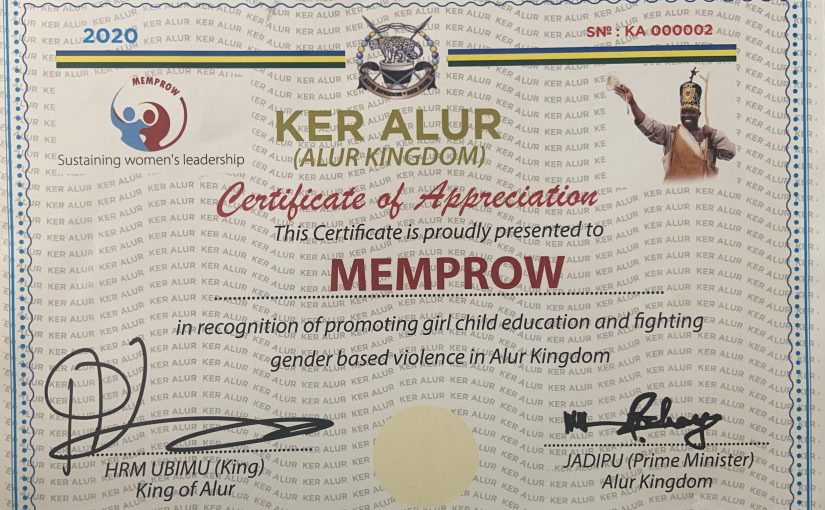 On 30th November 2020 during the 10th Coronation anniversary ceremony at KaalAtyak Zombo district, the Alur Kingdom leader/king, Rwoth Ubimo Olarker Rauni III, awarded MEMPROW a certificate in recognition of the good work they have so far done in the Kingdom.

For 12 years now, MEMPROW has implemented different projects in the different districts of West Nile region; these include Pakwach, Nebbi, Zombo, Terego and Arua. MEMPROW started to operate in this region to respond to problems affecting the girl child that included school dropout, early pregnancies and child marriages etc.  Since 2008, MEMPROW has worked with over 2000 girls in and out of schools including child mothers.

Through our engagement with these girls, we realised that some cultural social norms being practiced like ‘KENY’ greatly affected the girl child. Keny is an introduction ceremony that lasts three to five days exposing the girls and making them vulnerable to being abused especially sexual abuse.

MEMPROW’s approach is to deal with such norms by directly engaging individuals of influence; these stakeholders are being held accountable to safe guard girls rights and create safe spaces in the community where they live. Such stakeholders included; traditional leaders and their wives, Religious leaders, Local Council leaders, parents, teachers, opinion leaders and others.

RwothUbimoOlarkerRauni III expressed his heartfelt gratitude to MEMPROW for the tireless efforts they have employed for the last decade on promoting girl child education and fighting gender based violence in Alur kingdom, adding that with such support, he will ensure that MEMPROW works diligently for the girl child and women in his kingdom to attain their full rights and be treated with dignity. Ubimu, in one of his engagements with MEMPROW signed and pronounced an ordinance directing the chief in his kingdom to only allow ‘keny’ to last only one day. This was to ensure safety for the girls in the kingdom. 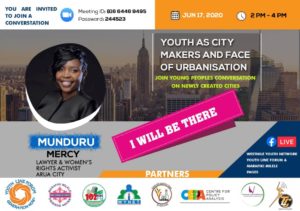 Youth as City Makers and Faces of Urbanisation 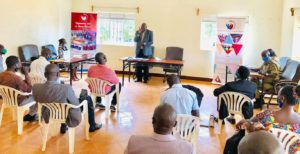 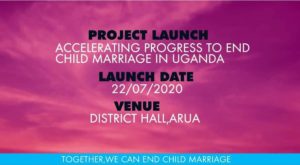